(Tallahassee, Fla.)  Members of the BowStern Marketing Communications Team received six awards at the 2016 Florida Public Relations Association (FPRA) Capital Chapter Image Awards competition yesterday. Representing a cross-section of work the marketing firm does for a variety of clients, the awards included a Grand Image Award for Audio Visual/Online Tools of Public Relations for an eblast. In addition to this high honor, BowStern earned an additional five awards, including: 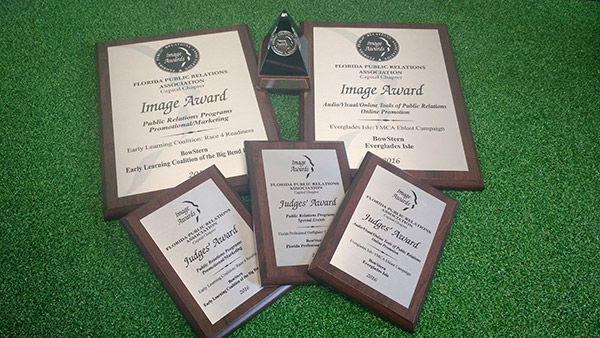 “To win six awards for three entries is certainly an honor,” said Kelly Robertson, APR, CEO of BowStern. “We work hard to provide the best possible results for our clients, and these awards are a reflection of the creativity and dedication of our entire team. Having our public relations peers deem our work award-winning is truly humbling.”

The FPRA Image Awards competition is open to all public relations and marketing agencies and associations in the capital city, and the awards have become a standard of excellence within the public relations industry. A panel of marketing professionals judges all entries based on production, execution, evaluation of results and budget.

Find us in these places too